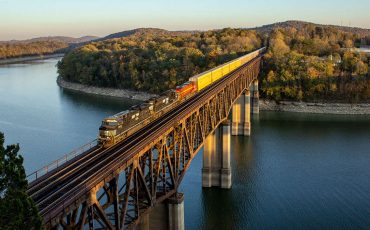 The Largest and Most Historically Significant Railroads in the US

Historically the largest railroad in the US has often been referred to as the veins of America, both in appearance and in their relevance to the rapid development of all major States. Many of these historically significant railroads are still around today, albeit refurbished and in many cases completely replaced with more modern materials. The fact that some of these major railroads are still used today is a testament to their timelessness and their efficacy.

For modern railroad owners, and those looking to build railroads for modern use, it can be helpful to look at some of the more exemplary and historically significant railroads that exist in America. Ask any Midwest Railroad contractor, and they’ll inform you that some of the best inspiration available for the development of modern railroads is in our history. Whether you physically visit them, or simply do your research about them, certain railroads have defined, and will continue to define, the future of railroads in America.

Here is an overview of exemplary and historically significant railroads which may be of inspiration.

The Great Northern Railway from Minnesota to Washington

A symbol of the success of Libertarianism in America, James J. Hill famously built this railroad (supposedly) without financial support from the federal government. Hill, an already established Minnesotan coal and freight merchant, and three associates bought the decaying St Paul & Pacific railroad and turned it into The Great Northern Railway. If the railroads in America were in its veins, the Great Northern Railway was one of the main arteries.

A favorite to many a Midwest railroad contractor, the Santa Fe was also known as the Atchison, Topeka and Santa Fe Railway. This was one of the larger railroads in the United States, and never actually connected to Santa Fe itself, due to the rugged terrain. The Santa Fe railroad hustled its way into existence, and even traded part of its line in Mexico at one point for track in the San Joaquin Valley. The railroad officially ceased operations on December 31 1996, when it merged with the Burlington Northern Railroad to become the Burlington Northern and Santa Fe Railway, and is now the biggest freight network in North America.

The Union Pacific Railroad from Nebraska to California

The largest railroad in America, after the Burlington Northern and Santa Fe Railway, the original Union Pacific railway was built as part of the First Transcontinental Railroad project, later known as the Overland Route. This monumental project connected the two coasts of America, and on connecting the two tracks from each side in Utah, a golden spike was laid in commemoration. The current Union Pacific is the oldest operating Class I railroad in the United States that has not originated as a merger between separate road names or holding companies.

Visiting the Golden Spike National Historic Site isn’t just for your average Midwest railroad contractor and their family, this site marks an integral part of America’s journey to where it is today.

Spreading from Philadelphia into Pittsburgh, Chicago, St. Louis, New York, Washington, D.C., Baltimore, the northern parts of Michigan and parts of West Virginia. The Pennsylvania Railroad was founded in 1846 and grew into the largest corporation in the world by 1882, something which seems impossible in the modern economic climate. In 1946, a whole century after its founding, this private railroad company reported its first ever loss.

The Northern Pacific Railroad – Puget Sound to The Great Lakes

Although this railroad was a government-sponsored enterprise from the start, it was riddled with financial problems throughout its short lifespan. The Northern Pacific wasn’t able to keep up with privately financed railroads, and a myriad of financial problems (bankruptcies, corruption, etc) followed the line everywhere it went. This tragic railroad survived in one form or another until 1970, where it was absorbed into the Burlington Northern Railroad system.

Not only can exploring these historically significant railroads give insight into what to (and what not to do) when building a railroad, but also give us an idea of how and why they were so integral in America’s development.

References: Association of American Railroads | 3 Industries that Rely on the Railroad System